"The older I get, the more I doubt"

Lifelong learning works better in a community where members share a similar background and spirit: this was the motto of the first EMBA homecoming event. Top-class speakers, such as watchmaking legend Jean-Claude Biver, workshops and social activities made it a vibrant occasion.

Around 3000 students have completed the EMBA at the University of St.Gallen over the last 30 years. In the Financial Times ranking of European business schools, the HSG comes fourth in terms of the quality of its program. Initially, only a few of its students were women. As HSG Rector Bernhard Ehrenzeller pointed out, however, they are now in the majority. The organizing committee led by Karolin Frankenberger, Academic Director of the EMBA HSG, and Franziska Eberhard, President of the EMBA HSG Alumni, had put together a varied program on the topic of "Being a human being – staying a human being". 250 alumni, professors, lecturers and current students accepted the invitation to Holzweid.

Legendary luxury watchmaker Jean-Claude Biver left no one unmoved in his talk with TV journalist Urs Gredig. Not least, his ability to laugh at himself and question himself was infectious. Driven by his passion for watchmaking and people, he goes about corporate innovation in his own way. At Hublot, for example, he created an advisory board consisting only of 13- to 18-year-olds so that he could gain a better understanding of how they see the future. "The older I get, the more I doubt," he said, talking about the sleepless nights when a decision was gnawing at him. 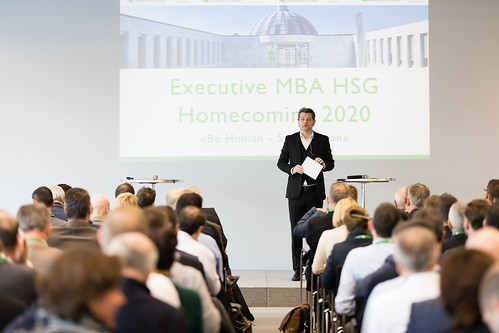 "Management is a privilege"
Bob Chapman, Chairman and CEO of Barry-Wehmiller, a global provider of technical consulting and manufacturing technology solutions, focused his presentation on employees. "According to a survey, 87 percent of employees in the US feel that their company does not care about them," he said. This had a devastating impact on people's lives, including relationships with their partners and children. Leadership had to be seen as a privilege, he said. "Treat your employees the way you would like your children to be treated," he urged.

Karolin Frankenberger, Director of the EMBA, monitors companies in transition in her research activities. She pointed out the dilemma that arises for those that want to develop their traditional business activities and at the same time build a new, digital business model. Interaction needs to be achieved, but this is extremely challenging because the two areas require fundamentally different capabilities. "The dilemma raises conflicts of interest that need to be addressed," she said. For example, by having the traditional business co-finance the development of the new division. Or by persuading employees to get involved, even if the outcome is still uncertain and some new activities could still be discontinued.

Developments on the Internet
Miriam Meckel, Director of the Institute for Media and Communication Management at the University of St.Gallen, used quantum computing technology to demonstrate how the world is changing and how we are also changing the way we think. She pointed out that the world had long since ceased to operate on binary principles, based on the distinctions between black and white, left and right, conservative and progressive. There were, she said, countless intermediate, overlapping states, and documented this statement with examples of deepfakes on the Internet, such as fake video interviews, that are difficult to detect. "We don't yet know exactly how to deal with this, but we have to learn," she noted. To do so, we would have to develop forward-looking competencies in the areas of knowledge, capabilities and character. At the same time, she expressed confidence, since humans had the ability to place things in an overall context and were therefore superior to artificial intelligence.

In addition to the speeches, the event allowed ample scope for networking, for example by participating in various themed workshops, chiseling ice sculptures, painting pictures, playing dominoes or joining in the party with live music in the evening. The event made a significant contribution to strengthening a sense of identity. "We are proud to be part of this community," said Karolin Frankenberger. Frankenberger and Eberhard have not yet set a date for the community’s next joint event.

Active EMBA HSG Alumni
EMBA HSG Alumni is financially well on track and very active, as proved by the General Assembly  of the association held on the same day. Activities include closer collaboration with the University of St.Gallen, continuing education events with attractive speakers such as Ulrich Schmid - he will speak about Russia in the geopolitical field of tension at the “Fiirabig” (afterwork) event - or a mentoring program. In addition, the association is going to turn up the volume on communication via social media. Wolfgang Jenewein, academic director from 2011 to 2018, has been appointed as a new honorary member. The meeting unanimously re-elected the Board of Directors consisting of Franziska Eberhard, Sarah Banzer, Pablo Behrens, Daniela Decurtins, Mark Mickoleit, Stefan Stübi, Robi Suter and Mandy von Piotrowski. Karlo Novak, who represents the alumni of the English-language international programs, was newly appointed to the Board.
Top